BackBack To Results You are in: Online-Only | Dogs | Hamsters, Mice & Other Rodents | Felicia Bond

If You Give a Mouse a Brownie 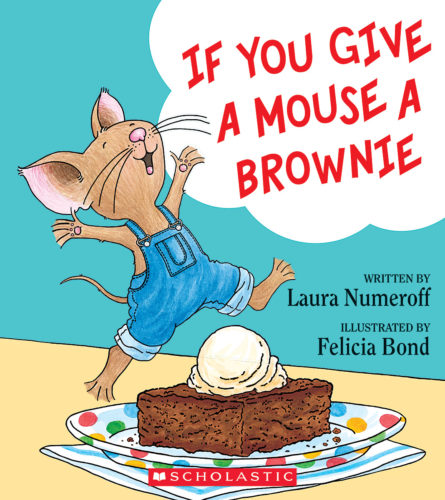 Short Summary
There's no stopping this crazy mouse once he gets started! The laughter builds with each turn of the page—and each new demand—as young children read along.
Share

More
If you give a mouse a brownie, he's going to ask for some ice cream to go with it. When you give him the ice cream, he'll probably ask you for a spoon. Then he'll start drumming on the table, and drumming will get him so excited…he'll want to start a band!

One thing leads to another when Mouse makes his long-anticipated return in this winning picture book from the #1 New York Times bestselling If You Give… series!
Show Less

One thing leads to another and always leads to comic chaos before coming full circle in this wildly popular series. If You Give a Mouse a Cookie, first published in 1985, began when author Laura Numeroff began telling a playful circular story about a demanding mouse to a friend on a cross-country car ride. When illustrator Felicia Bond came on board, she based the character of Mouse on her energetic boyfriend as a little boy—and a star was born. Since then the two have created more than 15 titles together that explore the humorous possibilities of cause and effect with an ever-expanding cast of animal friends. The series has fans all over the world, Oprah named it one of her "favorite things," and several first ladies have featured the books in White House read-alouds. With their spare, rhythmic texts and playful pictures, these beloved books have become treasured story-time favorites.

Free Online Resources:
DOWNLOAD If You Give a… Teaching Guide

The bestselling author of the wildly successful If You Give a Mouse a Cookie series was born in Brooklyn, New York, and grew up surrounded by art, music, and books. Laura attended Pratt Institute and graduated with a degree in communications and a contract for her first children's book, Amy for Short, published in 1975. Her books have been highlighted on Oprah and read by presidents and first ladies to children as well as featured at the White House Easter Egg Roll. An avid animal lover, she has also written a series celebrating service dogs called Raising a Hero, the proceeds of which support Canine Companions for Independence.

The best-loved illustrator of the contemporary If You Give a Mouse a Cookie series grew up in a big family, first in New York City and then in Texas. As a little girl, she loved the Madeline books, the pictures of Garth Williams, and the Peanuts cartoons, all of which would influence her fresh, clearly detailed style. Felicia is both writer and illustrator of Tumble Bumble, The Day It Rained Hearts, the Poinsettia books, and many others. She lived for many years in New York and currently lives in Santa Fe, New Mexico.