Who Would Win?® Jaguar vs. Skunk 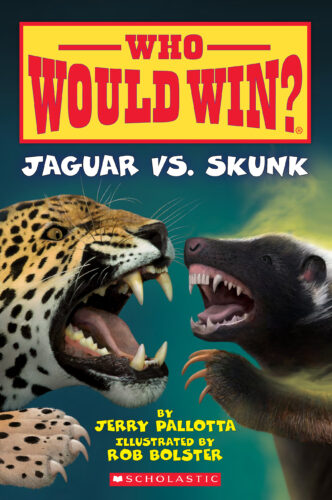 Short Summary
Smells like trouble! Find out what happens when a jaguar's big bite meets a skunk's stinky spray. Readers get the facts…then decide for themselves which one's harder to beat.
Share

Jerry Pallotta was a Massachusetts insurance salesman when he began looking for creative ways to teach his children their ABCs. He wondered why most of the alphabet books he was reading to them sounded so similar. "A" was always for apple, "Z" always for zebra. Because Pallotta had spent many summers in the fishing town of Scituate, Massachusetts, where lobsters, seaweed, and boats were always a part of his life, he wondered if there wasn't a way to combine his passion for the underwater world with teaching children the alphabet.

In addition, Pallotta has written funny, informative books about all kinds of holidays, from Halloween to Groundhog Day—plus the bestselling Who Would Win? series, in which he gives the facts about a pair of awesome animals (from bugs to grizzly bears) and asks readers to decide for themselves which one has the best chance of winning in a battle between them.

What will Jerry Pallotta write next? Only one thing is certain: if there's a way to turn rote learning into colorful, inventive books that kids can't wait to read…Pallotta will be the first to write them!