The Pigeon Loves Things That Go! 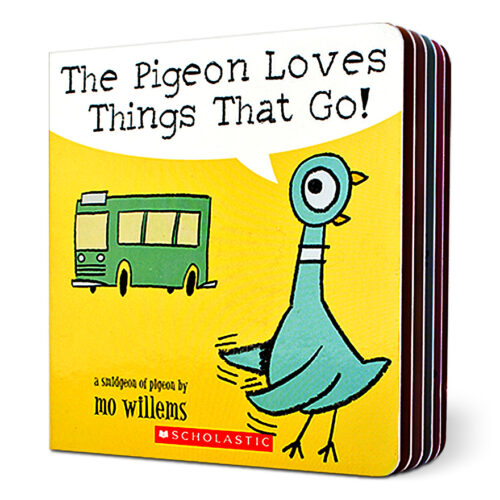 More
The bird that insisted on driving a bus now gets behind the wheel of all kinds of vehicles. Young readers will be sure to giggle as they see him getting excited at the thought of driving a plane, a train, a car, and more, all in his deliriously comic style.

Each special new word is boldly printed on the page—and the entire text includes repeating phrases to encourage reading along!

There are certain things this pigeon wants. Like a hot dog. And a puppy. And to drive the bus. He's got some really persuasive arguments, and he's not afraid to ask (or plead, or moan, or beg) the reader to let him have his way. With simple line drawings and lots of expressive dialogue, bestselling author Mo Willems keeps kids laughing and cheering for more!

Critically acclaimed and beloved by children, this talented cartoonist is the creator of so many beloved characters, including the demanding Pigeon as well as the best friends Elephant & Piggie. He began drawing when he was only three and continued studying art in college at NYU's Tisch School of the Arts. He began his career as an animator for Sesame Street while also performing stand-up comedy in New York City. Three of Willems's books have been awarded Caldecott Honors: Don't Let the Pigeon Drive the Bus! (2004), Knuffle Bunny: A Cautionary Tale (2005), and Knuffle Bunny Too: A Case of Mistaken Identity (2008). The Elephant & Piggie readers won the Theodor Seuss Geisel Medal in 2008 and 2009 and Geisel Honors in 2011, 2012, 2013, 2014, and 2015. He lives in Northampton, Massachusetts, with his family and loves writing and illustrating picture books because it lets him be a stay-at-home dad.