HOME
BackBack To Results You are in: Online-Only | Raina Telgemeier | Vicki Cobb 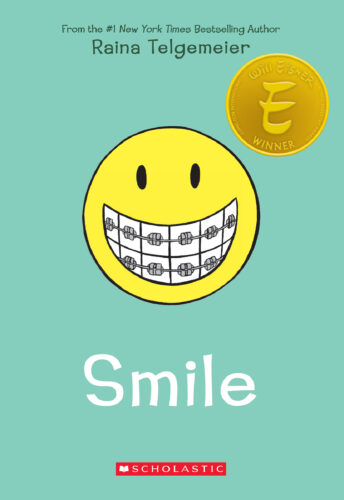 Short Summary
This bittersweet graphic novel about an extraordinary journey from injury to recovery shimmers with laughter and inspiration!
Share

More
Raina is a normal sixth grader who takes all the ordinary, good things in life for granted—until the night she trips and knocks out her two front teeth! The dentist puts them back in and says they should heal properly…but they don't.

Before long, Raina is cursed with braces, surgery, and a series of weird-looking headgear, each more embarrassing than the last. Will she ever feel normal again? One thing is for certain, the experience will change her—and life can only get better from here.

This charmingly illustrated, autobiographical graphic novel, told from Raina's point of view, will resonate with middle-school readers who fear being labeled as different, even as they embark on the search for their own unique identity.

Some author-illustrators invent their stories from imagination, others draw on their own lives. Award-winning graphic novelist Raina Telgemeier has done both. Raina loved comics as a child growing up in San Francisco. Her favorites were Calvin and Hobbes and For Better or for Worse. She began creating her own comics about that time, realizing that she "liked putting pictures and words together to tell stories."

When Raina was in sixth grade, she fell and knocked out her teeth—an accident that required braces, years of surgery, and lots of awkward smiles. Mocked and teased by her classmates, she withdrew into her love of drawing, eventually finding friends in high school who could appreciate her artistic gifts. The comic Smile was born out of a need to process that experience by getting it down on paper. A few years later her graphic novel Sisters, also autobiographical, won an Eisner Award.

Raina Telgemeier is one of the most popular illustrator-storytellers working today, with credits on DC Comics, X-Men: Misfits, and The Baby-Sitters Club, for which she is the series illustrator. In 2016, she published Ghosts, about a girl and her family moving to a new town, where she sees spirits and celebrates the Day of the Dead.