HOME
BackBack To Results You are in: 2nd Graders November 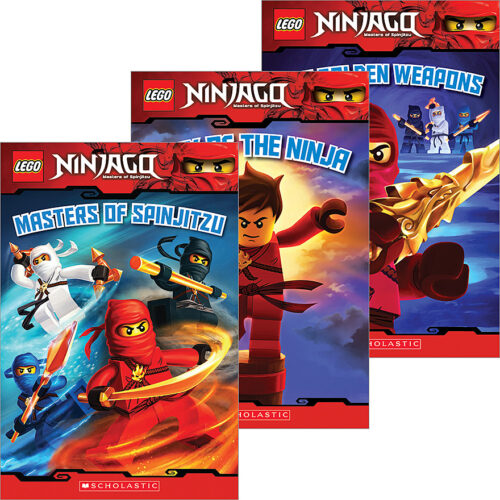 Short Summary
Packed with action, suspense, and surprises, the vividly illustrated books in this collection follow the adventures of four ninja warriors as they battle the forces of evil.
Share

More
Way of the Ninja
Kai's dream is to be a better blacksmith than his father. His dream will have to wait. One night, an army of skeleton soldiers on motorbikes roars into his village and kidnaps his sister. His only hope of saving her lies in the hands of Sensei Wu, a mysterious old man with unusual powers who needs Kai for a special mission. Sensei Wu offers to teach Kai the art of Spinjitzu. Desperate to rescue his sister, Kai accepts. And the legend begins.

Masters of Spinjitzu
Sensei Wu and the ninjas travel up a mountain in search of the Four Weapons of Spinjitzu. Without them, they can never defeat evil Lord Garmadon. A canyon appears—the skeleton warriors are digging below. Soon they will unearth the first weapon. The ninjas must beat them to it. Kai leaps into the canyon, then into danger after danger. Will his reckless behavior endanger the mission and the rest of the team?

The Golden Weapons
Once again, the four young ninjas have kicked the bony backsides of the skeleton warriors. Now they have three Weapons of Spinjitzu. Only one remains—then Lord Garmadon will be stopped. Suddenly Kai's sister appears in a vision. She leads him to the fourth weapon. But it's a trick. Garmadon appears. The weapon is his, and the other three weapons will soon be his again too. The ninja's only hope? To follow Sensei Wu into the Underworld.

LEGO, the LEGO logo, the Brick and Knob

configurations, NINJAGO, the NINJAGO: Masters of

Spinjitzu logo and the Minifigure are trademarks of

LEGO® Ninjago follows four young ninjas as they work to master the art of Spinjitzu in a land filled with skeleton warriors, deadly weapons, and battles between good and evil. The action-packed stories are designed to engage LEGO® fans, helping them sharpen reading skills as they explore an exciting world.

In 1934, a carpenter from Denmark created LEGO®, naming his company after the Danish phrase leg godt, which means "play well." The company has a simple mission, inspired by the infinite possibilities of its famous interlocking bricks: to encourage lifelong curiosity and a love of learning through imaginative play.